Myanmar: A Month into the Coup The military takeover in Myanmar has passed the one-month mark and the situation remains volatile, dangerous, and escalating. On 27 February, reports from the non-profit media organization Democratic Voice of Burma stated that Myanmar security forces had fired live ammunition at people participating in the widening Civil Disobedience Movement (CDM), killing 19 in nine cities, with another 10 deaths unconfirmed. At least 30 protestors were wounded and more than 1,300 people have been arrested. Even as I sit at my desk writing this, news reports from Myanmar on 3 March stated that at least another 39 people have been killed by military live fire in the streets of five cities. Crowds of protesters returned to the streets the next day, despite the risks.

When we look at the crisis in Myanmar through a Buddhist lens, it is not matter of monks, nuns, and golden stupas. The pivotal issue is suffering and the end of suffering for an entire nation, which includes a population almost 90 per cent Buddhist, as well as Christians, Hindus, Muslims, and people of other faiths. The fortunate reality is that there is a courageous Civil Disobedience Movement that includes all aspects of society, all ages, all of Myanmar’s many ethnicities. This movement will not be stopped.

For 60 years Myanmar’s 54 million people of all religions have been held hostage to a military dictatorship built by a cadre of generals. Under various names—the Burmese Socialist Programme Party (BSPP), the State Law and Order Restoration Council (SLORC), the State Peace and Development Council (SPDC), and now the Union Solidarity and Development Party (USDP)—the generals have ruled the country with brutality, free to line their own pockets and to fund an army of a half million, the Tatmadaw, whose only enemy seems to be their own people.

A blanket of fear has smothered the hopes and democratic aspirations of this nation since General Ne Win’s coup in 1962. In 26 years of military dictatorship, Ne Win and his BSPP systematically undeveloped a once-sustainable land, stealing agricultural, timber, and mineral wealth, leaving Burma (as it was then called) among the UN-designated poorest nations. History unfolds from there, with a violent uprising and Ne Win’s ouster in 1988, a military coup in 1990, the Saffron Revolution in 2007, and a constitutional referendum in 2008 that promised a sham democracy in which 25 per cent of the parliamentary seats were reserved for active members of the military. In 2015 national elections, the military’s proxy party, the USDP, was decisively defeated by Aung San Suu Kyi’s National League for Democracy (NLD), which won 86 per cent of the Assembly seats. Barred from the presidency by marriage to a foreign citizen, Daw Suu was appointed to a newly created post as State Councilor of Myanmar.

A general election in November 2020 gave the NLD an even greater majority, in a contest that was closely watched by international observers. While the process went smoothly in some regions, elections were canceled or partly canceled in significant parts of Rakhine, Shan, Kachin, and other minority states. The Rohingya ethnic minority across Rakhine State were prohibited from voting.

Seeing the democratic handwriting on the wall, General Min Aung Hlaing used the Trumpian battle cry of “election fraud” as a pretext for the ongoing military coup. Despite the escalating military violence against them, the people of Myanmar are not buying it. A fearless nonviolent resistance movement of civil service workers, housewives, students, and monastics has grown quickly and is a building democratic wave. It is particularly encouraging to see that the message of the CDM is echoed in statements from ethnic minorities, who have good reason to be wary of another NLD-majority government, which has often given a green light to military action in the ethnic states. The Diplomat online news magazine reports:

It came as another blow to the junta’s game plan when the 10 ethnic armed groups that are part of a floundering Nationwide Ceasefire Agreement (NCA) announced on February 20 that they would no longer negotiate with the military government, and will support efforts to topple it.

Their statement read: “We support the Civil Disobedience Movement (CDM) and public protests against the military coup and military dictatorship, and we are going to find ways to support these movements and protests.” 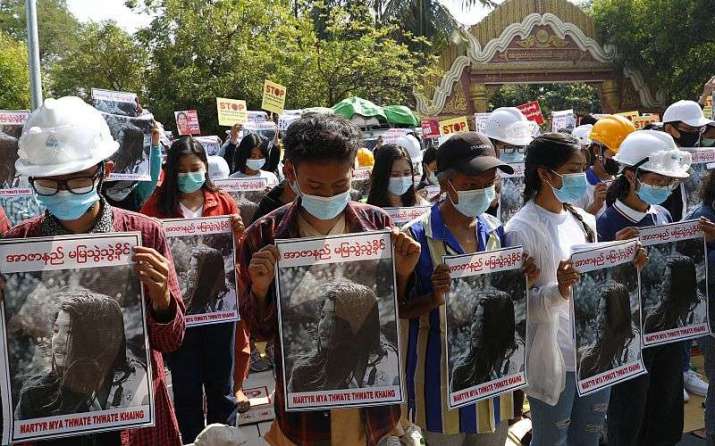 The CDM’s General Strike Committee, which led the successful nationwide shutdown on 22 February, included 24 ethnic minority groups willing to join the NLD in the massive protests. Most surprising is that, in the environment of the coup and resistance, there is increasing sympathy for and by the Rohingya community, which has endured genocide. According to the news magazine Nikkei Asia:

Many young protesters are now using social media to say they regret how they acted in the wake of the Rohingya crisis in 2017, when hundreds of thousands of Rohingya fled the country, by failing to explicitly criticize the government and military.

The atmosphere is now changing, with some protesters on the streets holding placards declaring, “I really regret the Rohingya crisis, which was done by the Myanmar military.”

One young participant in Myanmar’s CDM said of the Rohingya: “If I die tomorrow in the protests, I don’t want to have this regret on my mind.” (Vice) And yet, throughout this last month of coup and resistance there have been no words of apology to the Rohingya from respresentatives of the NLD.

As for the displaced Rohingya themselves, Australia’s ABC News notes in an opinion piece: “Rohingya refugees in Bangladesh showed solidarity by holding candle-light vigils and sharing photos displaying the three-fingered salute that has been adopted by the protesters.” In an 18 February op-ed in The New York Times, Rohingya poet Mayyu Ali, exiled in Bangladesh writes:

There have been protests in the refugee camp against the military coup, but no tears are being shed for Ms. Aung San Suu Kyi, who has defended the military and its genocidal violence. (The New York Times)

It is impossible to keep up with the pace of events in Myanmar, or to predict which way they will go. I fear further bloodshed at the hands of security forces, but this time I cannot imagine the generals succeeding at suppressing an entire nation while the whole world is watching with open eyes. The United States has already imposed targeted sanctions on Myanmar’s generals and coup leaders. Similar EU sanctions will be levied in the next few days. ASEAN has ruled out sanctions, but they are meeting this week to discuss Myanmar as tensions rise throughout the region. On 3 March, UN Special Envoy for Myanmar Christine Schraner Burgener remarked that the situation challenges “the stability of the region” and could lead to a “real war.” (UN News) A UN press release quotes Burgener:

She noted that the army’s “textbook” actions would not work, saying that while they were successful in 1988, 2007 and 2008, “today, we have young people who lived in freedom for 10 years. They have social media, and…[are] well organized and very determined. They don’t want to go back in a dictatorship and in isolation. So, I think the army is surprised, and maybe we have to help them to come out of this situation.” (UN News)

Clearly, though, the answer does not rest with sanctions or ASEAN or the UN, although each of them can influence the pace of social change. Change itself is in the hands of the people of Myanmar, particularly, the Civil Disobedience Movement, which includes all sectors of society. We can support this movement, even at a distance. Activist friends in Thailand have been working closely with allies on the ground in Myanmar to meet the requests of the CDM for nonviolence training, organizational resources and skills, and reliable links to media outlets. There is a critical need for communications, providing international phone cards to pro-democracy activists, and setting up encrypted online networks for regular updates on safety and security, action alerts, and potential hot spots.  There is much more we can do. Keep your eyes and ears open. As bodhisattvas, we can never turn away from the suffering of our sisters and brothers.

In Asia, donations in support of the Civil Disobedience Movement and Democracy in Myanmar can be channeled through the Spirit in Education Movement (SEM) and the International Network of Engaged Buddhists (INEB). SEM and INEB operate under the same Thai entity: Sathirakoses-Nagapradipa Foundation

Bank information for those who want to directly support the project:

In the United States, tax-deductible donations can be channeled through the Clear View Project, a tax-exempt 501(C)3 corporation supporting Buddhist-based relief and training. With thanks to activist friends inside Myanmar, to those in the Spirit in Education Movement in Thailand and Myanmar, and to brave journalists and citizen reporters who keep the necessary information coming in a steady stream.

The Other Shoe Drops: Reflections on Myanmar’s Latest Coup
Sea of Suffering: The Rohingya and the Conundrum of Buddhist Terror
Buddhistdoor View: Reconciling Nationalism and Buddhism

See more from The Bodhisattva’s Embrace by Hozan Alan Senauke