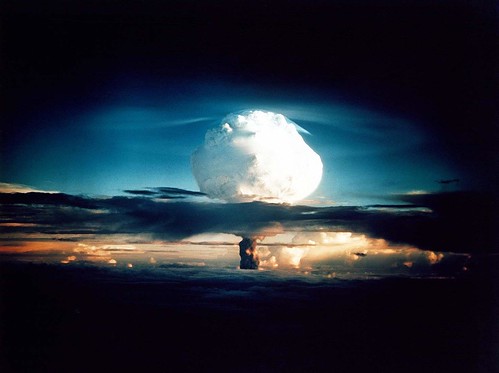 Science and Technology
(Image by US Department of State)   Details   DMCA

Use Smart Words to Stop #NukeDoomsday

by Susan C.StrongDuring this Democratic primary season and even before, a great many longstanding injustices in American life have become high profile: #MeToo, police violence against people of color, the climate crisis, to name just a few. But there’s one still under the public radar: the nuclear threat. The climate crisis will make life on earth increasingly unlivable, unless strong countermeasures are taken right now. But a nuclear weapons incident would make life on earth impossible overnight. Just because we’ve been spared this outcome so far doesn’t mean it will keep going that way. Two familiar but misleading nuclear metaphors keep people from grasping what the nuclear risk really is: 1. the red button,” and 2. “nuclear winter.”Correcting these in the public mind is vital for getting the nuclear policy changes we need.

Let’s start with the “the red button.” When Trump was elected in 2016, one of the things that people feared the most was that he would be the one to push to “push the red button.” Given the fact that he asked his campaign advisors that very year about the possibility of using our nukes, this was a reasonable fear. When he was told it would be a big mistake, his answer, “Then why do we have them?” did not reassure anyone. However, the risk of Trump himself setting off a nuclear exchange is overshadowed by a deliberately hidden reality. As Daniel Ellsberg revealed in his 2017 book, The Doomsday Machine, many military officers in the two biggest nuclear- armed countries actually have red buttons of their own. You could describe the situation as “a red button in every silo.” Ellsberg shows that this far-flung delegation was deliberately concealed from Congress, the American public, and the entire world. All of these red buttons are always “on,” not just the one in the White House. That’s hair trigger alert on”launch on warning.” Push one by mistake, and there is no going back, no time to check the actual source of an apparent threat or to think twice. There have already been manynuclear close ones over the years since the 1940’s, including one triggered by a flight of Canada geese.

But there’s another equally dangerous nuclear metaphor out there. That’s the phrase “nuclear winter.” What’s wrong with that? I’m a veteran of the anti-nuclear protests back in the 1980’s. I understand the power of the phrase in its original time. But things have changed. Today the most powerful Armageddon image in the public mind is our global ecosystem destroyed by fossil fuels. In that context, talking about nuclear “winter” is a mistake. “Winter” usually evokes something temporary in people’s minds, followed by “spring.” Even worse, the Chernobyl area where the Russian nuclear power plant melted down is well-known to be harboring some life now, however compromised. Entrepreneurs are beginning to promote tourist visits to it. But the idea that any kind of “spring” would follow a nuclear exchange is false. It would also risk a full-scale nuclear war. The effect of a modern nuclear war anywhere on earth would be omnicide, given the way wind moves in our atmosphere. #NukeDoomsday = omnicide, not just “winter.”

So while we’re demanding that our presidential candidates address the climate emergency, we must also say: “Talk about how you plan to stop a #NukeDoomsday! This is urgent right now, because nuclear restraint is rapidly breaking down, amid sharply rising international tensions. Trump and Putin destroyed the INF treaty, amid mutual charges of cheating on it. Our government is going ahead with new types of nuclear weapons, including the infamous “battlefield” type. And The Russians have announced that underwater nuclear drones will be placed on their new class of giant subs. Plus the North Koreans just launched a new, nuclear missile capable submarine.

What do we want our candidates to promise to do? In The Doomsday Machine, Ellsberg lays out a wish list of initial risk reduction actions the U.S. should take. These steps, he says, would not compromise basic nuclear deterrence. They are: 1. Take our own nuclear weapons off hair trigger alert, inviting all nuclear-armed nations to follow suit 2. Stop building even more devastating new types of nuclear weapons . 3. Declare a policy of no first use. In addition, we should restart nuclear weapons reduction negotiations with the Russians and with Iran over their new enrichment steps.

Number 1, taking our nuclear weapons off hair trigger alert would buy precious time in a crisis. It would address the most shocking revelation in Ellsberg’s book: that the power to launch is widely delegated throughout a far-flung network, which, like all things human, is dangerously subject to human error. In the meantime, we must start birddogging our candidates and legislators about the “red button” and “nuclear winter” myths now, using language that tells the truth about the risks we actually face: a red button in every silo and instant nuclear omnicide: #NukeDoomsday.
————————
Susan C. Strong, Ph.D., is the Founder and Executive Director of The Metaphor Project, http://www.metaphorproject.org, and author of our book, Move Our Message: How to Get America’s Ear. The Metaphor Project has been helping progressives mainstream their messages since 1997. Follow Susan on Twitter @SusanCStrong, check out her TEDx talk, and like, follow & review The Metaphor Project on Facebook.

Related Topic(s): Armageddon; Chernobyl; Congress; Deterrence; Doomsday; International; Legislators; Military; Negotiation; Nukes; (more…)
Add to My Group(s)
Go To Commenting
The views expressed herein are the sole responsibility of the author and do not necessarily reflect those of this website or its editors.

Counter-frame It! How to Stop Using Their Words