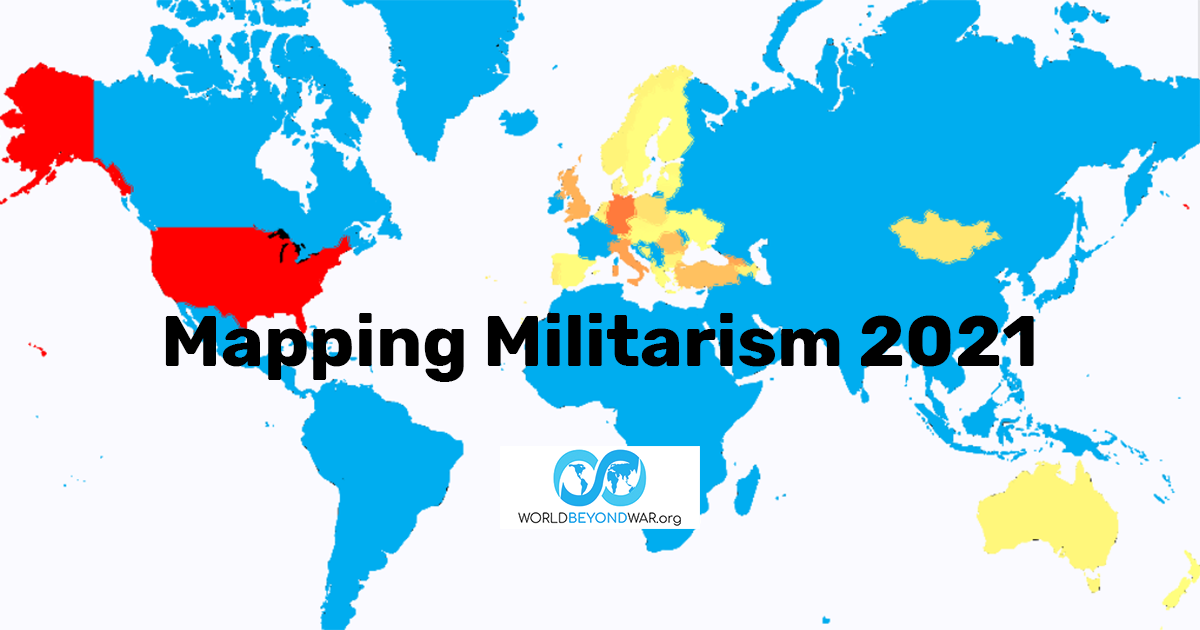 By David Swanson, World BEYOND War, May 3, 2021
https://worldbeyondwar.org/mapping-militarism-2021/

This year’s annual update to World BEYOND War’s Mapping Militarism project uses a completely new mapping system developed by our Technology Director Marc Eliot Stein. We think it does a better job than ever of displaying the data of warmaking and peacemaking on maps of the world. And it makes use of new data reporting on the latest trends.

When you visit the Mapping Militarism site, you will find seven sections linked across the top, most of which contain multiple maps listed down the lefthand side. Each map’s data can be seen in map view or list view, and the data in list view can be ordered by any column you click on. Most of the maps/lists have data for a number of years, and you can scroll back through the past to see what’s changed. Every map includes a link to the source of the data.

The maps included are as follows:

The maps of what we know about drone strikes add to the picture of wars, thanks to data from the Bureau of Investigative Journalism, as do the maps of what the U.S. government admits to on numbers of air strikes.

“China is now a true peer competitor in the military,” claimed Thomas Friedman on April 28, 2021, in the New York Times. This sort of claim is debunked by the maps on spending and spending per capita, which we’ve created using data from Stockholm International Peace Research Institute (SIPRI). SIPRI leaves out a great deal of U.S. military spending, but is the best set of data available to compare nations with each other. It turns out that China spends 32% what the United States does, and 19% of what U.S. and NATO members/partners do (not including Russia), and 14% of what the United States plus allies, weapons customers, and military “aid” recipients spend together on militarism. In per capita terms, the U.S. government spends $2,170 on war and war preparations for every U.S. man, woman, and child, while China spends $189 per capita.

When it comes to military spending in 2020 U.S. dollars, the biggest offenders are the United States, China, India, Russia, the UK, Saudi Arabia, Germany, France, Japan, and South Korea.

When it comes to military spending per capita, the leading spenders are the United States, Israel, Singapore, Saudi Arabia, Kuwait, Oman, Norway, Australia, Bahrain, and Brunei.

There are other areas so dominated by the United States that it makes no sense to include other nations on the map, except as impacted by the United States. So, the maps in the section on U.S. Empire include the number of U.S. bases and troops per country, each country’s membership or partnership with NATO, and a global picture of U.S. wars and military interventions since 1945. This is ever more a global operation.

The set of maps on the promotion of peace and security tell a different story. Here we see different patterns, with countries standing out as leaders on the rule of law and peacemaking that are not among the leaders in warmaking on the other maps. Of course, many countries are a mixed bag of steps away from and toward peace.

We hope these maps serve as guides to what’s needed and where, going forward!

David Swanson is an author, activist, journalist, and radio host. He is executive director of WorldBeyondWar.org and campaign coordinator for RootsAction.org. Swanson’s books include War Is A Lie. He blogs at DavidSwanson.org and WarIsACrime.org. He hosts Talk World Radio. He is a Nobel Peace Prize nominee, and was awarded the 2018 Peace Prize by the U.S. Peace Memorial Foundation. Longer bio and photos and videos here. Follow him on Twitter: @davidcnswanson and FaceBook, and sign up for: Activist alerts. Articles. David Swanson news. World Beyond War news. Charlottesville news. Connect with WBW:

—
This is a listserve to discuss the building of a global nonviolent movement to end war and establish a just and sustainable peace.

Participants on this list must be respectful toward each other, not advocate violence, and not promote electoral candidates.
—