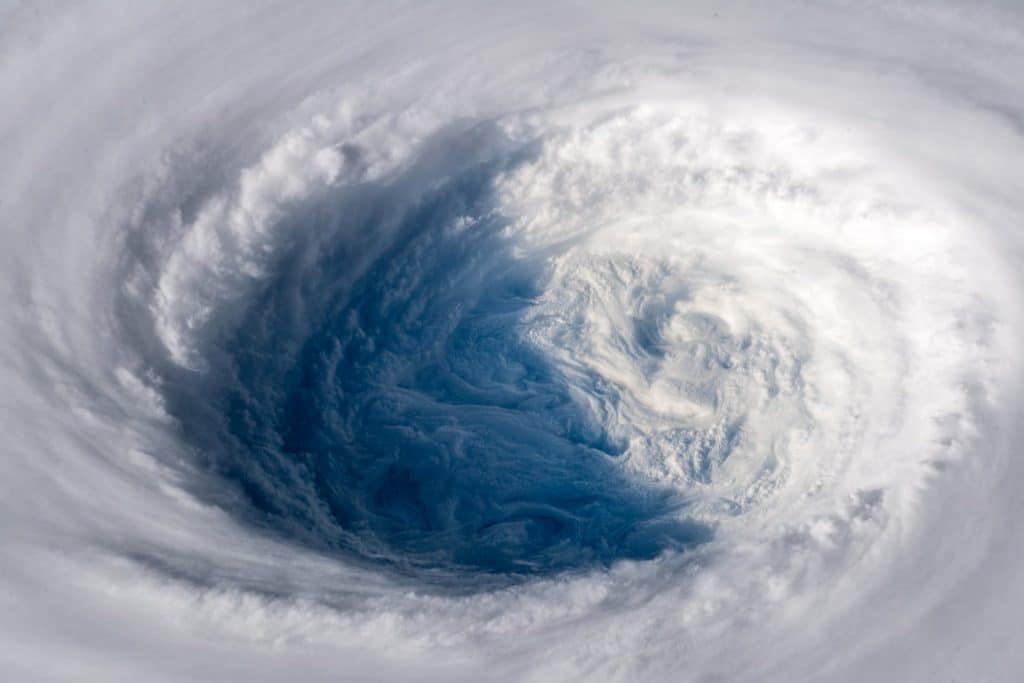 Category 5 Super Typhoon Trami, on its way to Japan and Taiwan in September, 2018. Image courtesy of European Space Agency/Alexander Gerst.

Editor’s note: This story was originally published by the Guardian. It appears here as part of the Climate Desk collaboration.

Pandemics such as coronavirus are the result of humanity’s destruction of nature, according to leaders at the United Nations, the World Health Organization (WHO) and the World Wildlife Fund (WWF) International—and the world has been ignoring this stark reality for decades. The illegal and unsustainable wildlife trade as well as the devastation of forests and other wild places were still the driving forces behind the increasing number of diseases leaping from wildlife to humans, the leaders told the Guardian.

They are calling for a green and healthy recovery from the Covid-19 pandemic, in particular by reforming destructive farming and unsustainable diets.

A WWF report, also published on Wednesday, warns: “The risk of a new [wildlife-to-human] disease emerging in the future is higher than ever, with the potential to wreak havoc on health, economies and global security.” WWF’s head in the UK said post-Brexit trade deals that fail to protect nature would leave Britain “complicit in increasing the risk of the next pandemic.”

High-level figures have issued a series of warnings since March, with the world’s leading biodiversity experts saying that even more deadly disease outbreaks are likely in the future unless the rampant destruction of the natural world is rapidly halted. Earlier in June, the UN environment chief and a leading economist said Covid-19 was an “SOS signal for the human enterprise” and that current economic thinking did not recognize that human wealth depends on nature’s health.

“We have seen many diseases emerge over the years, such as Zika, Aids, Sars and Ebola and they all originated from animal populations under conditions of severe environmental pressures,” wrote Elizabeth Maruma Mrema, head of the UN convention on biological diversity, Maria Neira, the World Health Organization director for environment and health, and Marco Lambertini, head of WWF International.

With coronavirus, “these outbreaks are manifestations of our dangerously unbalanced relationship with nature,” they said. “They all illustrate that our own destructive behaviour towards nature is endangering our own health—a stark reality we’ve been collectively ignoring for decades.

“Worryingly, while Covid-19 has given us yet another reason to protect and preserve nature, we have seen the reverse take place. From the Greater Mekong, to the Amazon and Madagascar, alarming reports have emerged of increased poaching, illegal logging and forest fires, while many countries are engaging in hasty environmental rollbacks and cuts in funding for conservation. This all comes at a time when we need it most.

“We must embrace a just, healthy and green recovery and kickstart a wider transformation towards a model that values nature as the foundation for a healthy society. Not doing so, and instead attempting to save money by neglecting environmental protection, health systems, and social safety nets, has already proven to be a false economy. The bill will be paid many times over.”

RELATED:
How it feels to predict a pandemic: Interview with David Quammen, author of Spillover

The WWF report concludes the key drivers for diseases that move from wild animals to humans are the destruction of nature, the intensification of agriculture and livestock production, as well as the trading and consumption of high-risk wildlife.

The report urges all governments to introduce and enforce laws to eliminate the destruction of nature from supply chains of goods and on the public to make their diets more sustainable.

Beef, palm oil and soy are among the commodities frequently linked to deforestation and scientists have said avoiding meat and dairy products is the single biggest way for people to reduce their environmental impact on the planet.

Tanya Steele, the head of WWF-UK, said the post-Brexit trade deals must protect nature: “We cannot be complicit in increasing the risk of the next pandemic. We need strong legislation and trade deals that stop us importing food that is the result of rampant deforestation or whose production ignores poor welfare and environmental standards in producer countries. The government has a golden opportunity to make transformative, world-leading change happen.”

The WWF report said 60-to-70 percent of the new diseases that have emerged in humans since 1990 came from wildlife. Over the same period, 178 million hectares (approximtaely 687,262 square miles) of forest have been cleared, equivalent to more than seven times the area of the United Kingdom.

As the coronavirus crisis shows, we need science now more than ever.

The Bulletin elevates expert voices above the noise. But as an independent, nonprofit media organization, our operations depend on the support of readers like you. Help us continue to deliver quality journalism that holds leaders accountable. Your support of our work at any level is important. In return, we promise our coverage will be understandable, influential, vigilant, solution-oriented, and fair-minded. Together we can make a difference.