Last week, I outlined genetic evidence that the present pandemic had its origin in a laboratory. In the segment below, I tell two stories of how this might have occurred, one as leak from an American lab and one from a Chinese lab. I was surprised to find that there is a history of collaborative work between American and Chinese bioweapons labs on exactly the kind of Coronavirus responsible for the current epidemic, in which a protein that binds with ACE2 was artificially spliced onto the genome of the bat virus ancestor.

Here’s a puzzle worthy of Sherlock Holmes’s story of the dog who didn’t bark. The Chinese are eagerly promoting narratives about the SARS-CoV2 virus originating in America, while the Americans assume that, of course, the virus evolved where the first cases were identified, in Wuhan, China. But both sides agree, SARS-CoV2 had a natural origin, and had nothing to do with genetic engineering or breeding in a laboratory.  As we shall see below there are credible links to both the Wuhan Institute of Virology and to the US bioweapons HQ at Fort Detrick, MD and a university lab at Chapel Hill.

Why wouldn’t these two propaganda machines be eager to demonize one another by promoting stories about leaks from the other’s weapons lab? If one but not the other of these spin-control states were too eagerly dismissing the bioweapons meme, I know what I would suspect. But what does it mean that both these rivals are suppressing all discussion of the issue?

Two stories—they can’t both be true

There is a plausible story about a Chinese origin for COVID. There is another story, in my view equally plausible, about an American origin. The two stories are not easily reconciled, and that suggests to me that I have been suckered by disinformation, one way or the other. Some part of what I am about to report is not true. More confusion: there are hints that fall short of being a “story” about coordinated bioweapons development between China and the US. I like to think of it as a real-life mystery novel. I ask you, dear readers, to help figure out who is telling the truth, who is lying, and whodunnit. America? China? A cooperation between the two?

Or maybe it was Professor Pangolin*.

Outline of the Chinese story:

Outline of the American story:

Reports of bioweapon collaboration between USA and China

Exhibit A for this hypothesis is this Nature Medicine article from 2015. It describes a collaboration between University of North Carolina scientists and the Wuhan Virology Laboratory, funded jointly by American agencies, including Fauci’s NIAID, and the Chinese National Science Foundation. They describe modifying the bat coronavirus, the very one that is most closely related to the SARS-CoV2 pandemic. They use genetic engineering to add an ability to bind to the human (and mouse) ACE2 receptor, the very same modification that makes SARS-CoV2 so contagious.

The nominal justification for such research is to understand how such recombinations might occur in nature, so that we might be better prepared to defend against them if such a recombination should happen to take place. The number of such recombinations that could conceivably take place is enormous. But this group was lucky to anticipate the exact virus and the exact modifications that would make it a problem five years later. They had a jump on the competition. “Our work suggests a potential risk of SARS-CoV re-emergence from viruses currently circulating in bat populations.” Prophetic. And the research took place in the Chinese city where the current pandemic was first recognized. Coincidental.

It is morally outrageous that such research should be proceeding. It has been against International Law since 1975 (based on a 1969 treaty), and explicitly outlawed in the US since 1989. “Whoever knowingly develops, produces, stockpiles, transfers, acquires, retains, or possesses any biological agent, toxin, or delivery  system for use as a weapon, or knowingly assists a foreign state or any organization to do so, shall be fined under this title or imprisoned for  life or any term of years, or both.” The law singles out research in gain-of-function engineering, as described in the Nature Medicine article.

Layered on my moral outrage is a head scratch: Why would a government agency steeped in secrecy publish such research? Even if we grant that their intent was not to produce a bioweapon but to learn about what might, at some future date, happen in nature, the fact remains that the paper contains explicit instructions that anyone with hostile intent might use to create a bioweapon.

Earlier in my career, I had security clearance as part of my research at Physical Sciences, Inc in the 1970s. I saw just enough of the Defense Department’s security system to extrapolate that the CLASSIFIED stamp was used liberally on any finding that might conceivably be used as part of a weapon system, even if the work described basic physics that had been well known for a century or more. Contrast this institutional paranoia with treatment of the Nature Medicine article, which is published freely, though it includes explicit instructions with which a competent but malevolent biochemist might produce an artificial pandemic.

What were the authors thinking when put such research out for the world to read? I have written to two of the authors to ask them.

American work on bioweapons can be traced to Nazi scientists who had been experimenting with non-consenting human subjects, exempted from being charged as war criminals and imported to the US to continue their work under Operation Paperclip. The current wave of research sponsored not by the Defense Department but by civilian NIAID was begun in 2003, and protested widely in 2005.

More than 700 scientists sent a petition on Monday to the director of the National Institutes of Health protesting what they said was the shift of tens of millions of dollars in federal research money since 2001 away from pathogens that cause major public health problems to obscure germs the government fears might be used in a bioterrorist attack. [NYTimes]

Regardless of whether COVID-19 derived from a laboratory, let’s put an end to state-sponsored bioweapons research. It’s already illegal.

The case for the Wet Market origin has gained popular acceptance despite evidence that is thin to nonexistent. Pictures like this one are used to appeal to our lizard brains. Of course something so disgusting must be a breeding ground for germs. 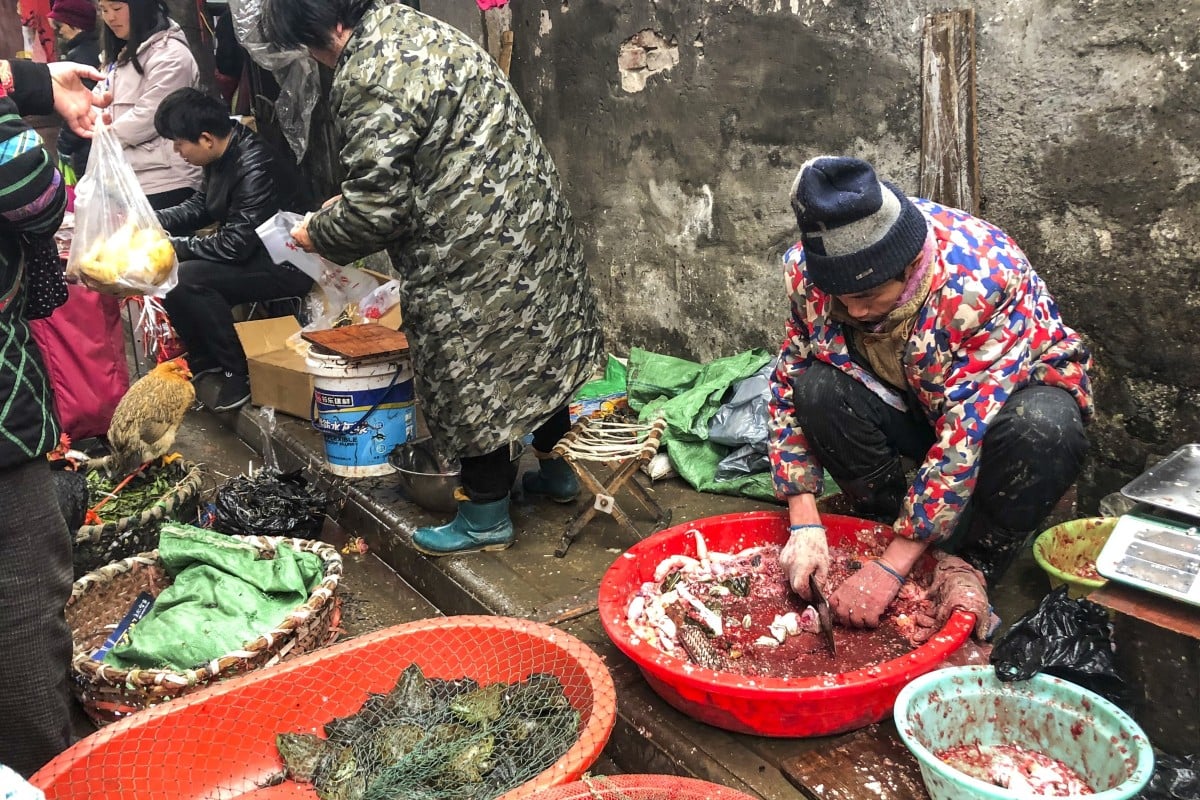 Here’s how we do it in America. Is it any less distasteful? Yes, the way in which animals are killed for food is disgusting, and we don’t like to look at it. But does it have anything to do with the way viruses mutate and acquire new functions?

Standard evolutionary theory tells us that mutations are random. (I’ve been a critic of standard evolutionary theory, but for reasons that I think are not relevant to the present discussion.) Occasionally, a random mutation makes it possible for a virus to jump from one species to another. But these mutations are rare enough that we don’t expect them to occur simultaneously with three other gain-of-function mutations that make a virus both more lethal and more contagious. Computer models based on the full SARS-CoV2 genome have trouble accounting for all the differences from the bat genome in a sufficiently short time frame. The wet market hypothesis is a politically convenient fallback, without a proposed mechanism. The bats that harbor SARS viruses live 1,000 miles from Wuhan and are not sold in the local meat market at Wuhan.

* The pangolin that has been proposed as an intermediate host is an endangered species. It cannot be sold legally in China, and the idea that there were underground pangolin vendors in the Wuhan wet market has not even been alleged, let alone researched. This Guardian article is appropriately skeptical. The Nature article which is the original source of the pangolin theory does not claim there were pangolins at the Wuhan market. A follow-up Nature article points to further weaknesses in the pangolin hypothesis, and clarifies that the pangolin virus genome is not closer than the bat virus to SARS-CoV2.