Skip to content
It truly amazes me how scared fairly reasonable people are that if Bernie Sanders is the Democratic nominee, Donald Trump would somehow trample all over him in a national election. Perhaps it’s a testament to how bent-out-of-shape Trump has made even the best of us during his tenure in office. But let me try to offer some solace to those currently in the grip of what might be called “Trumpicosos”.

To begin with, let’s start with the most objective measurement of prevailing public opinion available of (despite what the cynics might tell you: yes Hillary did win the popular vote by 3 million votes, just as the polls predicted).

Nationally, if one averages the findings of five of the major polling outfits, Bernie Sanders is currently beating Donald Trump by 4.6% (if one eliminates Emerson, which tends to be heavily weighted towards Republicans ((like Rasmussen is)) the average is actually over 5.2%). And then, if one assumes the same voter turnout in 2020 as 2016 (which is actually not reasonable, and I’ll come to that”), Bernie’s margin of victory would be about 6 million votes- around twice that of Hillary Clinton’s. This is a very healthy margin indeed for Presidential elections, and would make the possibility of Trump squeezing another Electoral victory out of it significantly more remote.

But there are even more important differences between 2020 and 2016. For one, the Donald has already had the colossal advantage of over 5 years (since 2015) of non-stop, coast-to-coast, all-Trump-all-the-time media coverage. This kind of publicity could not be purchased with any number of billions of dollars by any candidate. It’s even been said that coverage of Trump is single-handedly warding off an inevitable collapse of the news media once Trump leaves office. But, after all of this: Sanders is still beating Trump by about 6 million votes.

On top of the advantage Trump already has had with news coverage, and the power of the incumbency, Sanders is currently beating Trump handily not only well before the Democratic primaries have ended, but before he has even begun a national campaign. Yes, Senator Sanders’ comfortable margin of victory is at a place in time when Bernie Sanders has yet to even step foot in the vast majority of states in this country and has had a chance to make his case, one-on-one to voters.

Now, this does not take into effect the inevitable voter turnout tsunami, which awaits all Democrats awaiting election in November. Remember 2018, when just the existence of Trump in the White House let loose a Blue Wave that washed Democrats back into power in the House of Representatives? Well, let us pause and ponder for a moment on just how pale in comparison the voter turnout in an off-year election would surely be when the Man Himself is up-close-and-personally on the ballot! The mind simply reels. “It’s our last chance to save ourselves!!!” “I’ve walked 30 miles and have waited 12 hours in line, but thank you Jesus!!!” Etc”

There are, of course, rumblings regarding how Trump will bash Bernie with the “Socialism’ thing. But, friends, Sanders has been running against Democrats as well as Republicans (probably a lot smarter than Trump) for decades as a Socialist (which he isn’t really any more than FDR was, and I do hope more people will start pointing out), and has been winning elections, regardless. Plus, knowing full well that he is a Socialist, Sanders is still the most popular politician in the country currently holding elective office. Trump’s “critique” will probably just be mostly preaching to the converted. Everyone else has heard it all before.

Yes, there is talk about Russian interference in the election. But, I think there is only so much they can do. And the GOP’s penchant for dirty tricks will likely take its toll. But I really don’t see how even those tricksters can really overcome all of the above mentioned obstacles. The establishment Democrats haven’t been able to stop him, and they don’t have to deal with even a fraction of what looms on the horizon for Trump.

And, saved for last, is something that the news media has willfully overlooked for sometime now: Bernie Sanders is the most formidable candidate in recent memory. Let’s not forget that he came out of virtually nowhere in 2015 and would have been beaten Hillary Clinton for the Democratic Nomination if the game hadn’t been so rigged (Ralph Nader memorably said “Clinton won by dictatorship”). Nonetheless, even rigged, Sanders won 46% of the delegates. It’s difficult to recall now, but until Bernie entered the race, Hillary was probably the most popular and powerful political figure in America. Bernie virtually blew her out of the water. And, once again this year, a 78 year old Jewish Socialist from Vermont, has leapfrogged over all progressives and moderates alike to become the Democratic front-runner by a substantial margin (one national poll now has Sanders leading with twice the numbers #2 Biden has.).

Can leapfrogging over one more Neo-fascist, flim-flam artist be so far from the realm of possibility, even likelihood?

Trump himself has said he’d rather run against Michael Bloomberg than Bernie Sanders.

That very well may be one of the precious few things he has ever said, that has more than the ring of truth in it” 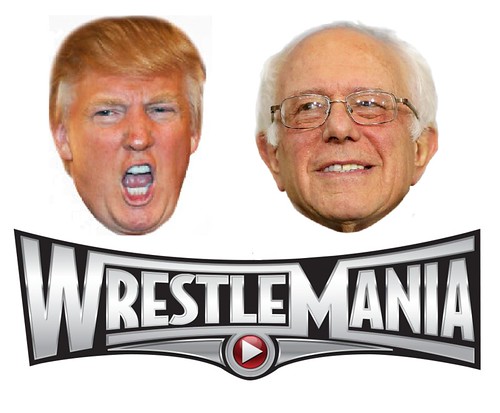 US Tax Attorney with a somewhat radical political bent.

Related Topic(s): Democratic; Democrats; Election; Media; People; People; Republican; Sanders Scenario The Probable Path To The Nominati; Socialism; Trump; (more…)
Add to My Group(s)
Go To Commenting
The views expressed herein are the sole responsibility of the author and do not necessarily reflect those of this website or its editors.

Even Trumps Come and Go

Pat Robertson: “Trump Allowing Christians to be Slaughtered in Syria”