Everyone, did you see my message? We got some huge news!

During Mayor Bill de Blasio’s State of the City address last week he announced that NYC will BAN all new fossil fuel projects!

I don’t need to tell you how critical this win is — New York City is a trailblazer and one of the biggest economies in the world.

But, a win this big doesn’t come easily and can’t happen overnight. 350.org organizers and our allies have been battling the dirty industry in New York for years and years thanks to the support of people like you.
In honor of this huge moment, will you make a contribution to keep up this work?

With your support, we can keep protecting our cities and communities together.

See my original message below:

We did it! Moments ago, Mayor Bill de Blasio announced a ban on all new fossil fuel projects in New York City.

New York City’s ban on fossil fuel projects is the largest municipal ban of its kind, ever. Our movement has fought to achieve this for years. And it’s all thanks to unrelenting grassroots pressure, by our allies and the dedicated work of 350.org staff that we’ve come this far.

We’re entering a new phase of the climate movement. Make a donation now to help power our movement so we can get governments everywhere to commit to fossil fuel project bans like New York City’s. 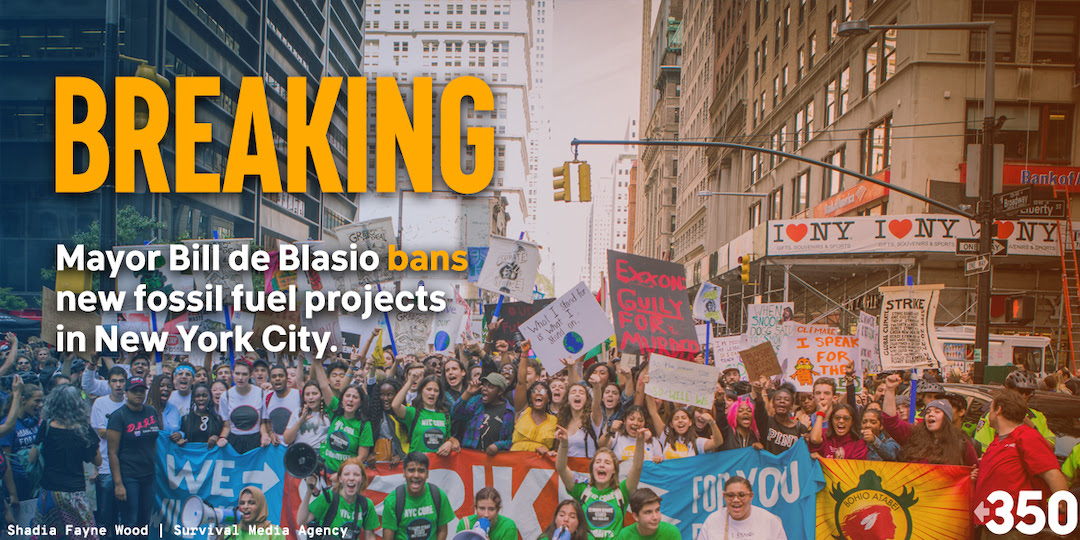 New York City has been a strong trendsetter for climate policy for years. When New York City announced its intent to divest its massive pension from fossil fuels two years ago, it set off a wave of divestment declarations from around the US and the world, clocking in at over $14 trillion in commitments to date.

New York is a trailblazing city and it’s only a matter of time before more cities follow suit. That means now, more than ever, we need to apply massive pressure from the ground up to ensure New York City’s fossil fuel project ban becomes a global trend.

Wins like this are the results of years and years of hard work. And it can only happen with the support of people like you, Rosan. Can you make a contribution to this work today? With contributions of $5, $50, or $500 dollars from supporters around the world, we can keep fighting and winning against the fossil fuel billionaires. Rosan, can I count you in?

Yes! I want to fight back against the fossil fuel billionaires today.

350.org is a global movement that fights for a just and equitable world by stopping the fossil fuel industry from continuing to destroy our climate.
Keep 350.org strong by chipping in right now: