Young US adults increasingly favor socialism after capitalism’s broken promises. But US already has socialism – for the rich 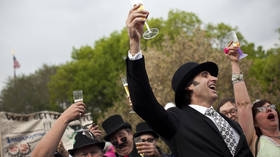 Nearly three-quarters of young Americans are likely to vote for a socialist candidate, a new poll reveals, suggesting capitalism has lost its appeal. But is it really capitalism when government funds all but the working class?

Young Americans view socialism much more favorably than their elders, with 70 percent likely to vote for a socialist, according to a poll released on Monday by the Victims of Communism Memorial Foundation. The survey also found that 50 percent of millennials (aged 23 to 38) have an unfavorable view of capitalism. Only Generation Z (aged 16 to 22) was more anti-capitalist – 51 percent view the economic system negatively.

ALSO ON RT.COMToday’s protests indicate the scale of troubles in our paradise (by Slavoj Zizek)While the organization’s name betrays its spin on these statistics, its pearl-clutching takes leaves out the fact that the American system has become more and more socialist over the years, to the point where the only group that does not benefit from socialist policies is the working class. A system in which the government bails out banks, subsidizes Big Oil, and pours billions of dollars into private military contractors free to set their prices as high as they wish may not be socialist in name, but it certainly isn’t how capitalism was imagined.

Americans can’t be blamed for resenting a system that has saddled them with crippling debt, from student loans to medical bills to credit cards often maxed out in an effort to juggle the former – but any resemblance to capitalism is coincidental. Americans have socialism for the rich, while ordinary people are taught their failure to thrive in a rigged economy is their fault alone.

The 2017 Trump tax cuts further accelerated a decades-old trend of trickle-up economics, in which the wealth of working people has steadily consolidated in the hands of the .01 percent. The 500 richest families in the US now pay a lower tax rate than the working class – assuming, of course, that they pay taxes at all.

Capitalism’s defenders wax poetic about free markets, but there’s nothing free about a healthcare system in which patients are penalized for not buying in, as Obamacare was initially designed. That system has seen prices skyrocket as insurance companies are free to foist exorbitant premiums on customers who have no choice but to buy. Progressives calling for Medicare for All are merely seeking to extend the socialization of healthcare to the people who are supposed to benefit from it – the patients.

ALSO ON RT.COMLecturing the ‘peons’? Pelosi mocked for blaming voter disenchantment on outside forces who ‘poisoned’ social mediaIn the same way, military contractors that corner the market on certain proprietary parts are free to set their prices as high as they wish, and any lawmaker who cries foul on the ever-expanding military budget is slammed as unpatriotic. This model gives Americans hideously expensive yet barely functional “innovations” like the F-35, which costs over a trillion dollars to develop but can’t fly in the rain.

The banking sector was the beneficiary of socialism in 2008, when the government pumped $700 billion in taxpayer dollars directly into banks that had grown fat on so-called “toxic assets,” including bundles of bad mortgages from people who ended up losing their homes to foreclosure. The people didn’t get bailouts that could have kept roofs over their heads – that would be socialism!

Energy companies receive some $20 billion in taxpayer-funded subsidies every year, a 2017 report found. President Trump may boast of the US’ “energy independence,” but the companies that create that energy are thoroughly dependent on Uncle Sam to keep them afloat.

What little social safety net there is in the US benefits only the poorest of the poor, with income caps that exclude most employed people making above minimum wage. As a result, the working class – traditionally, at least in theory, the beneficiaries of socialism – is the only group that doesn’t get to enjoy its fruits in this upside-down system.

Young people are right to be disgusted with what passes for capitalism in the US. Most developed nations have figured out how to combine elements of socialism with a market economy in a way that benefits everyone – it’s time the US catches up to them.

The statements, views and opinions expressed in this column are solely those of the author and do not necessarily represent those of RT.