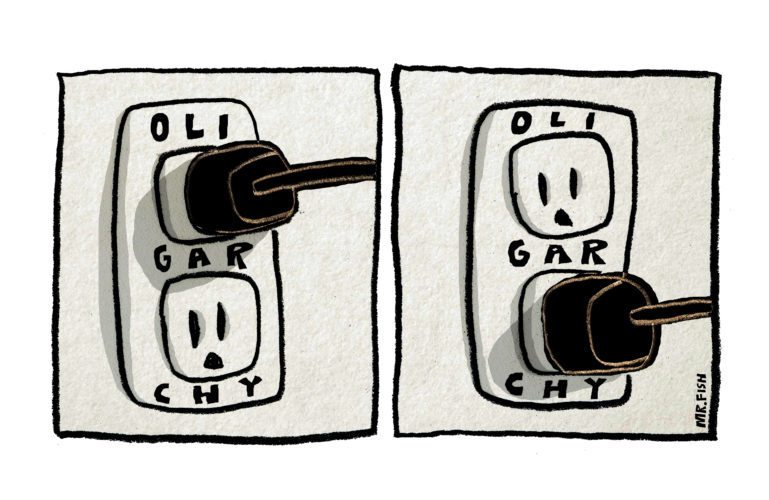 Impeachment is about cosmetics. It is about replacing the public face of empire with a political mandarin such as Joe Biden, himself steeped in corruption and obsequious service to the rich and corporate power, who will carry out the same suicidal policies with appropriate regal decorum. The ruling elites have had enough of Trump’s vulgarity, stupidity and staggering ineptitude. They turned on him not over an egregious impeachable offense — there have been numerous impeachable offenses including the use of the presidency for personal enrichment, inciting violence and racism, passing on classified intelligence to foreign officials, obstruction of justice and a pathological inability to tell the truth — but because he made the fatal mistake of trying to take down a fellow member of the ruling elite.

Yes, Trump pressured Ukraine President Volodymyr Zelensky to give him dirt on Biden and his son, Hunter Biden, and there probably is some. Yes, it appears the U.S. president withheld roughly $400 million in military aid to Ukraine in order to exert leverage over that government. Yes, he attempted to block the release of the whistleblower report that detailed his conduct. Yes, this is a violation of the law, one that many Democrats in Congress see as an impeachable offense.

But this kind of dirty quid pro quo is the staple of politics and international relations. Christopher Steele, a former British intelligence official, was hired to dig up dirt on Trump and Russia by Fusion GPS, a research and intelligence firm under contract to investigate Trump by Perkins Coie, a law firm working for the Clinton campaign and the Democratic National Committee. Four decades ago, Ronald Reagan’s campaign manager, William Casey, asked the Iranians not to free the American hostages held in Tehran until after the November presidential election to hurt incumbent Jimmy Carter, according to Gary Sick, Carter’s chief aide on Iran. The American hostages were released the day Reagan was inaugurated, in January 1981.

Trump, however, will not go quietly into this good night. He will attempt to bring the whole rotten edifice down with him. And he may succeed.

“The Democrats thrive on silencing and intimidating his supporters, like YOU, Friend,” reads a fundraising appeal for Trump that was sent out immediately after the impeachment inquiry was announced this week. “They want to take YOUR VOTE away. President Trump wants to know who stood with him when it mattered most.”

But fundraising from a looming impeachment proceeding will be benign compared with what I think will come next. Trump’s rhetoric, as the pressure mounts, will become ever more incendiary. He will, as he has in the past, openly incite violence against the Democratic leadership and a press he brands as “the enemy of the people.”

There is no shortage of working-class Americans who feel, with justification, deeply betrayed and manipulated by ruling elites. Their ability to make a sustainable income has been destroyed. They are trapped in decaying and dead-end communities. They see no future for themselves or their children. They view the ruling elites who sold them out with deep hostility.

Trump, however incompetent, at least expresses this rage. And he does so with a vulgarity that delights his base. I suspect they are not blind to his narcissism or even his corruption and incompetence. But he is the middle finger they flip up at all those oily politicians like the Clintons who lied to them in far more damaging ways than Trump. Trump was weaponized to stick it to the man. Polls in the 2016 presidential election showed that 53 percent of Trump supporters were motivated by dislike of Hillary Clinton and only 44 percent said they were motivated by support for Trump.

“People no longer voted for candidates they liked or were excited by,” Matt Taibbi writes in “Insane Clown President: Dispatches From the 2016 Circus.” “They voted against the candidates they hated. At protests and marches, the ruling emotions were disgust and rage. The lack of idealism, and especially the lack of any sense of brotherhood or common purpose with the other side (i.e., liberals and conservatives unable to imagine a productive future with each other, or even to see themselves as citizens of the same country), was striking.”

Impeaching Trump would be seen by his supporters as an effort to take away this primal, if ineffectual, form of defiance. It is yet another message to the disenfranchised, especially those in the white working class, that their lives, their concerns, their hopes and their voices do not matter. This huge segment of the population, as Trump is aware, is heavily armed. There are more than 300 million firearms in the hands of U.S. civilians, including 114 million handguns, 110 million rifles and 86 million shotguns. The number of privately owned military-style assault weapons — including the AR-15 semi-automatic rifles used in the massacres at Marjory Stoneman Douglas High School in Parkland, Fla., and the Sandy Hook Elementary School in Newtown, Conn. is estimated at 1.5 million. The United States has the highest rate of gun ownership in the world, an average of 90 firearms per 100 people. Mass shootings in the U.S. take place at a rate of one or more per day on average.

Economic, social and political stagnation, coupled with a belief that our expectations for our lives and the lives of our children have been thwarted, breeds violence. Trump, fighting for his political life, will use rhetorical gasoline to set it alight. He will demonize his opponents as the embodiment of evil. He will seek to widen the divisions and antagonisms, especially around race. He will brand his political opponents as irredeemable enemies and traitors. He will demand omnipotence, the power of a dictator. Many of those for whom he is a cult leader will seek to give it to him. For when the magical aura of Trump’s power is attacked, those in the Trump cult feel attacked. He is an extension of them. Trump embodies the yearning by millions of Americans, especially those in the Christian right, for a cult leader.

The efforts by the Democratic Party and much of the press, including CNN and The New York Times, to remove Trump from office, as if our problems are embodied in him, will backfire. Our social, cultural, economic and political crisis created a demagogue like Trump. These forces will grow more virulent if Trump is impeached. The longer we fail to confront and name the corporate forces responsible for the misery of over half the U.S. population and our broken democracy, the more the disease of cultism will spread. It was the seizure of power by corporations that vomited up Trump. And it will be only by freeing ourselves from corporate rule, by rebuilding our democratic institutions, including the legislative bodies, the courts and the media, that we can roll back from the abyss.

If we do not succeed in overthrowing corporate power, the explosive devices mailed to Trump critics and leaders of the Democratic Party, including Barack Obama, Hillary Clinton and Joe Biden, along with George Soros, James Clapper and CNN, allegedly by Cesar Sayoc Jr., an ex-stripper and fanatic Trump supporter who was living out of his van, will become an acceptable form of political expression. Such assassination attempts will, if left unchecked, eventually succeed. Anarchic lawlessness and tit-for-tat forms of political murder will swiftly turn the United States into a failed and terrifying state.

Hedges was part of the team of (more…)

Related Topic(s): Corporations; Corruption; Democratic; Impeached; Impeachment; Media; Trump, Add Tags
Add to My Group(s)
Go To Commenting
The views expressed herein are the sole responsibility of the author and do not necessarily reflect those of this website or its editors.

The Radical Christian Right and the War on Government

Why the United States Is Destroying Its Education System

Rise Up or Die

The Most Brazen Corporate Power Grab in American History