Despite getting panned by the chattering class, former Special Counsel Robert Mueller’s testimony last weekend appears to have put wind in the sails of Democrats calling for impeachment.

It may not have summoned a mass movement marching in the streets demanding Donald Trump’s ouster, but there are real signs that refocusing attention on potential presidential crimes has given the impeachers momentum, at least for now.

The latest sign is a big one: Sen. Patty Murray of Washington, the third-ranked Democrat in the Senate, announced Sunday evening that she now supports an impeachment inquiry:

I agree with my fellow members of the Washington delegation that, as we have learned more about the gravity of the potential threats to our democracy identified in Special Counsel Mueller’s report, it has become clear the House should begin proceedings to determine whether the President’s actions necessitate impeachment.

Politico’s Kyle Cheney noted that now nine of the 13 Democrats on the Intelligence Committee, which held one of the two Mueller hearings along with the House Judiciary Committee, now support impeachment proceedings. And in total, the number of House Democrats who have called to move forward with impeachment has risen to 105 since the Mueller hearings. Before Mueller, that number was below 90, according to a count by the New York Times.

And the Judiciary Committee is sending clear signs that it is accelerating toward impeachment as well. On Friday, Chair Jerry Nadler (D-NY) confirmed that, “in effect,” the committee’s investigation of the president and the Mueller report is now about considering articles of impeachment. While this phrasing is still cautious, it’s clearly a big step forward from where the Democrats were prior to the Mueller hearing. And it’s clear that, despite her hesitation on the impeachment issue, House Speaker Nancy Pelosi was onboard with this newly aggressive framing. As Politico’s Andrew Desiderio explained:

NEW: On a day that House Dems rewrote their entire impeachment strategy, Nadler & Pelosi stood at the same podium and — minutes apart — offered seemingly different messages. But on the substance, they’re in line; Pelosi gave her blessing.

By petitioning a court for the grand-jury evidence, House Democrats have finally put in writing that they are actively considering whether impeachment is warranted.https://www.politico.com/story/2019/07/26/nancy-pelosi-donald-trump-impeachment-1437530 …

16 people are talking about this

All of this seems to run counter to the idea that coalesced as the media narrative during and after the Mueller hearings. Many pundits believed the event was a “disaster” for Democrats and that it completely undermined the case against the president. But it’s hard to square this idea with a growing number of Democrats supporting impeachment after the hearings, and with Pelosi — who is clearly averse to impeachment — allowing the process to ramp up following the testimony.

It’s probably true that the testimony disappointed many impeachment fans and wasn’t the rallying moment that some had hoped for. But it did refocus attention on the Mueller report, which details extensive evidence of Trump’s potential crimes and damning accounts of his corrupt, if non-criminal, behavior. Mueller also seemed to imply, for the first time, that he believed Trump’s sworn answers to the special counsel’s office weren’t all “truthful” and that there’s an ongoing investigation of possible foreign blackmail of the president’s team. According to the Times, Congress is now zeroing in on Trump’s possibly deceptive written testimony.

And again, despite the gloomy reception of Mueller’s testimony from the media, a poll from ABC News suggested that public opinion on the issue didn’t change much after the hearing. 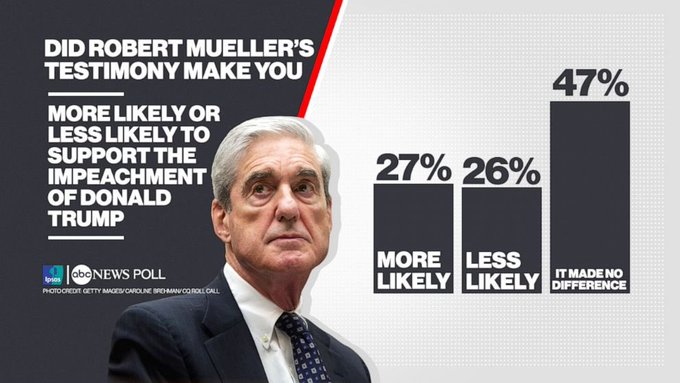 See Will Steakin’s other Tweets

It looks like Mueller didn’t convince many Republicans to turn against the president, but he wasn’t a gut-punch for the would-be impeachers that many believed.

Where all this goes from here is unclear. It’s still a minority of House Democrats who support impeachment, and while Mueller’s testimony may have given the movement a boost, it may still not be enough to change the outcome in the chamber. And almost everyone believes that, almost regardless of what happens, Trump’s acquittal in the majority-Republican Senate is a foregone conclusion. Before even that could happen, though, House Democrats in vulnerable seats will resist being forced to take a vote on the issue, which could hurt them electorally no matter which position they choose.

Democrats will push for more evidence and more grand jury material from the Mueller probe, and they’ll push for testimony from more witnesses like former White House Counsel Don McGahn. If they want to change the game on impeachment, they’ll need to push public opinion on the margins enough so that a vote in the House wouldn’t hurt the Democrats who are most at risk. It’s not clear they have any moves left to play at this point, though, that will accomplish that feat. Because while Mueller’s testimony wasn’t a disaster for the impeachers, it may be that it was the impeachers’ last best chance to convince the doubters.

Don’t let big tech control what news you see. Get more stories like this in your inbox, every day.

Yet another Trump ally is under federal investigation of foreign influence during the campaign: report

Why people who should really know better obsess over useless polls