By David Swanson, Executive Director, World BEYOND War, May 6, 2019
https://worldbeyondwar.org/militarism-mapped/

World BEYOND War has just released an updated 2019 mapping of militarism in the world.

Open the mapping system, check out, and customize the maps here.

Here are some examples of what the map system can show. (You’ll find detailed numbers and sources and dislpay options at the link above.)

Where wars are present that directly and violently killed over 1,000 people in 2018:

Where wars are present and where wars come from are two different questions. If we look at where money is spent on wars and where weapons for wars are produced and exported, there is no overlap with the map above.

Here’s a map showing countries color-coded based on the amount of weapons exported to other governments from 2015 to 2018:

Here are dictatorships that the United States sells or gives weapons to (and in most cases gives military training to): 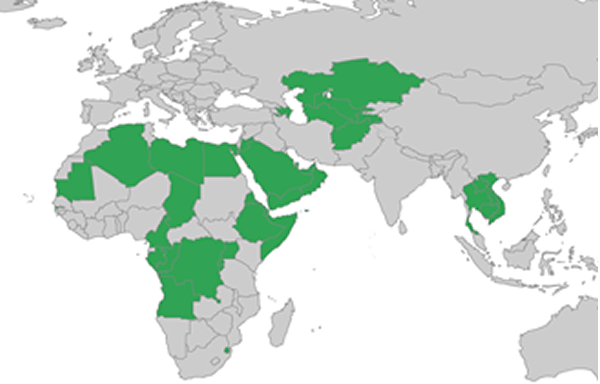 These countries purchase U.S. weapons and report on it to the United Nations:

This next map shows countries color-coded based on how much they spend on their own militarism:

Here are countries colored based on how many nuclear weapons they have:

In the next map, every color but gray indicates the permanent basing of some number of U.S. troops, not counting special forces and temporary deployments.

The map system includes numerous maps illustrating steps toward peace. It also allows scrolling back through time. Here are the nations that had signed the new treaty to ban all nuclear weapons at this time last year:

And here they are now:

This one shows which nations are members of the International Criminal Court:

This one shows from which nations people have signed World BEYOND War’s pledge to help try to end all wars:

That pledge can be signed at http://worldbeyondwar.org/individual

The maps and more information about them can be found at http://bit.ly/mappingmilitarism