Skip to content
New research from University College London and the Woods Hole Oceanographic Institution (“Anomalously Weak Labrador Sea Convection and Atlantic Overturning“) found that the hiccups in the Great Conveyor Belt began around the time of the Industrial Revolution, when we — for the first time in millions of years of human evolution — started spewing billions of tons of fossil-fuel-derived carbon dioxide into the atmosphere. The Great Conveyor Belt has been deteriorating ever since, and the speed of its disintegration is now alarming observers worldwide.

Scientists are concerned that we may even be close to a tipping point, where this river of warm, salty water could change or collapse rapidly and with little warning — a change that probably would take tens of thousands of years to undo or reset.

As Dr. Michael Mann, one of the world’s most respected climate scientists and the founder of the “hockey stick” that Al Gore popularized, told me on my radio/TV program April 24th:

“This is a potential tipping point in the climate system, which is to say it could happen very abruptly once it starts to happen. The danger is that we’ve already seen a substantial slowdown in this ocean circulation pattern, [and that] suggests the possibility that we could be right up against that tipping point where it essentially just shuts down.”

Mann added that until the recent research came in, pretty much everybody thought we had 100 years or so before we needed to begin to even seriously consider this potentially catastrophic scenario:

“If you talked with climate modelers even 5 or 6 years ago, they would have told you that this scenario isn’t likely to play out for at least another century or so. … So something that we didn’t expect to happen for the better part of a century is happening already.”

And lest Americans think this will only be a European problem, shutting down the AMOC/Gulf Stream, which warms the American northeast, would also have a catastrophic impact on that region of the United States and Canada.

As NASA’s scientists note on one of the few climate-change web pages the Trumpies haven’t yet removed:

Compare that to the damage a mere 1 degrees C drop in the 1816 Year Without a Summer caused to both Europe and the eastern part of North America in 1816. Civilization — and billions of people — probably would simply no longer survive as we know it.

Like a long-term smoker who notices that he’s beginning to cough up blood, it’s long past the time we should have done something substantial and worldwide to wean off our addiction to fossil fuels. And as Republican politicians nationwide, supported in part by the Koch brothers’ mind-boggling fossil-fuel fortune, continue to deny even the basic science of climate change, things are deteriorating daily.

Given the stakes — the survival of much of the western world, and “civilization” as we know it — we all must step up and become political activists.

Note to Republicans and GOP donors: It’s no longer just your children and grandchildren whose lives you’re ruining in a distant future when you think you’ll be dead. If this happens as soon as it looks like it may, it will be you and your friends, too.

Is Europe about to experience famine? 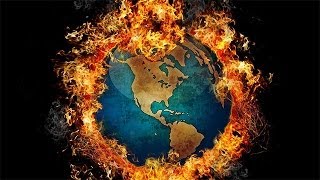 Global warming is among the most alarming environmental issues that the world faces today.
(Image by YouTube, Channel: list25)   Permission   Details   DMCA

New research shows that we may well be on the edge of a civilization-destroying climate change event. And we must do something about it.

Most Americans are at least vaguely familiar with the Irish Potato Famine of 1845, but few could tell you much at all about the much larger planet-wide famine of 1816. But Europeans can tell you all about the “Year Without a Summer,” because their news sometimes references it in the context of global climate change. It’s one of the deepest fears of many Europeans.

The reason a famine from 200 years ago spooks modern Europeans is because climate change could bring it back, only this time it would be long-lasting rather than just hanging on for one year. As such, it could throw Europe and parts of North America into prolonged famine, disease, depopulation, civil strife, and war” just as climate change has the Mideast in the past decades.

But first, to understand the Year Without a Summer and how it informs us about this new danger, step into the Wayback Machine.

In 1815, Mount Tambora in the Dutch East Indies erupted, throwing an enormous amount of ash into the upper atmosphere. As this layer of ash circled the globe, it cooled the planet — for the next year — by somewhere between .7 degrees and 1.3 degrees Fahrenheit.

That was enough to throw Europe into the worst famine of the entire 19th or 20th centuries.

As Wikipedia (and hundreds of other sources) notes:

“Cool temperatures and heavy rains resulted in failed harvests in Britain and Ireland. Families in Wales traveled long distances begging for food. Famine was prevalent in north and southwest Ireland, following the failure of wheat, oat, and potato harvests. In Germany, the crisis was severe; food prices rose sharply. With the cause of the problems unknown, people demonstrated in front of grain markets and bakeries, and later riots, arson, and looting took place in many European cities. It was the worst famine of 19th-century Europe.”

And this was just one single year of less than 1 degrees Celsius of cooling.

Imagine if the cold never ended, but persisted decade after decade, and the cold was far greater than just a one-degree drop. Europe would experience widespread famine and massive political disruption.

Climate change disrupting entire civilizations is not merely hypothetical. Scientists (including political scientists) now know that over the past 30 years global warming pushed the desert south in Syria and other parts of the Middle East, displacing over a million farming families as their farms turned to dust and sand, setting up today’s Syrian Civil War (and conflicts from Egypt to Libya to Tunisia).

With just a few years of prolonged crop-unfriendly weather, Europe would be in even worse shape than Syria is today. Chaos, death, famine, and disease would rule the continent, while demand for food would trigger crises across the world.

But how can global warming provoke cooling in the eastern part of North America and across Europe?

The scenario was the plot basis (albeit wildly exaggerated) of the 2004 sci-fi film The Day After Tomorrow.

A deep ocean current sometimes called the Great Conveyor Belt (scientifically called the AMOC or Atlantic Meridional Overturning Circulation) brings warm South Pacific water down under the southern tip of Africa, and then up the east coast of South and North America (we call it the Gulf Stream) to western Europe. (Here’s a video from NASA.)

This river of water — larger in volume than all the land-based rivers in the world — delivers millions of tons of warm water a minute to an endpoint just south of Greenland and west of the UK, where, as much of the heat from that water is lifted into the atmosphere to blow east and warm Europe, the now-cool and saltiest-sea-water-in-the-world (it loses moisture along with heat) sinks deep down toward the ocean floor to begin its multi-year-long journey back toward the South Pacific

Because this system is driven by both temperature and the sudden increase in salinity as it loses heat in the North Atlantic, its driving system is called thermohaline (temperature-salt).

The reason London and Amsterdam, at latitudes similar to Calgary and Edmonton, have weather like that of Europe is an Atlantic Ocean current driven by heat and salt.

And because the UK, Germany, the Netherlands, Poland, and all of Northern Europe and Scandinavia are at roughly the same latitudes as the area from central Canada to Alaska, the only thing that keeps them warm enough to sustain rich crop yields (unlike Alaska) is the heat distributed to them from the Great Conveyor Belt/AMOC.

And the main thing that keeps the AMOC moving is the incredible salinity that forms in the North Atlantic as the current gives up both heat and water vapor, (leaving behind the salt) into the soon-to-warm-Europe air with the warmth. Because the strongly saline water is so much denser/heavier than normal seawater, it sinks vigorously toward the deeper parts of the ocean, pulling the rest of the current behind it and helping maintain the AMOC’s flow.

Should something begin to inject fresh water into that region, thus diluting the salinity of the AMOC there, it would reduce the density of that water column and thus could shut down the Conveyor Belt. And that would shut off Europe’s main heat source.

This is a scenario that most climate scientists — until this year — considered a remote possibility, even in the next century.

But it’s beginning to happen right now, both in Antarctica and off the coast of Greenland and Western Europe, because of massive glacier melts.

As Chris Mooney notes in the 4/3/18 Washington Post (“One Of The Most Worrisome Predictions About Climate Change May Be Coming True“):

“The new research, based on ocean measurements off the coast of East Antarctica, shows that melting Antarctic glaciers are indeed freshening the ocean around them. And this, in turn, is blocking a process in which cold and salty ocean water sinks below the sea surface in winter, forming ‘the densest water on the Earth’…”

Meanwhile, the northern part of the Great Conveyor Belt — which warms Europe — is also faltering in the North Atlantic, largely as a result of hundreds of billions of tons of cold, fresh water from Greenland glacier-melt, caused by global warming, pouring into it every few minutes.

Thom Hartmann is a Project Censored Award-winning New York Times best-selling author, and host of a nationally syndicated daily progressive talk program on the Air America Radio Network, live noon-3 PM ET. www.thomhartmann.comHis most recent books are “The Last Hours of Ancient Sunlight,” “Unequal Protection: The Rise of Corporate Dominance and the Theft of Human Rights,” “We The People,” “What Would Jefferson Do?,” “Screwed: The Undeclared War (more…)